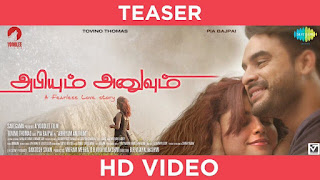 The second teaser of BR Vijayalakshmi’s romantic drama Abhiyum Anuvum is out, giving us a peek into the relationship between the two protagonists – played by Piaa Bajpai (Anu) and Tovino Thomas (Abhi).

More upbeat compared to the first teaser, this one focuses on how the couple met – beginning with a friend request on Facebook, casual dating, and then, love. There is also the subject of sex and lust which Anu brings up.

Malayalam actor Tovino Thomas makes his Tamil debut with this film. Piaa Bajpai, as seen in the first teaser released in August last year, had to tonsure her head for the film. “I didn’t hesitate even for a minute because the story genuinely required it,” she said.

Produced by Yoodlee Films, the supporting cast includes Suhasini Maniratnam, Prabhu, Manobala, and Rohini, with music composed by Dharan Kumar and lyrics by Madhan Karky. The film is slated for a March 9, 2018 release.