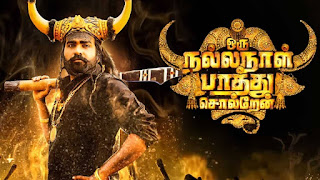 The current business module for Tamil films is that Satellite rights are bought by the major Television channels only after the release and rates are fixed only depending on the success at the box office; However, 'Oru Nalla Naal Paarthu Solren' has been bagged by market leader Sun Tv already and the reason is the film is making all the right noises in trade circles .

'Oru Nalla Naal Paarthu Solren' produced and directed by Arumugakumar has Vijay Sethupathi, Gautham Karthick, Gayanthree and Niharika Konidela in the lead roles while Ramesh Tilak and Viji Chandrasekhar are also in the cast.

The film has music by Justin Prabhakaran and the audio launch was held in Malyasia during the Natchathira Vizha with, Datuk M Saravanan - Deputy Minister of Youth and Sports Malaysia and Malindo Airlines CEO Mr.Chandran Ramamoorthy doing the honors. The team is planning to release the film very soon.