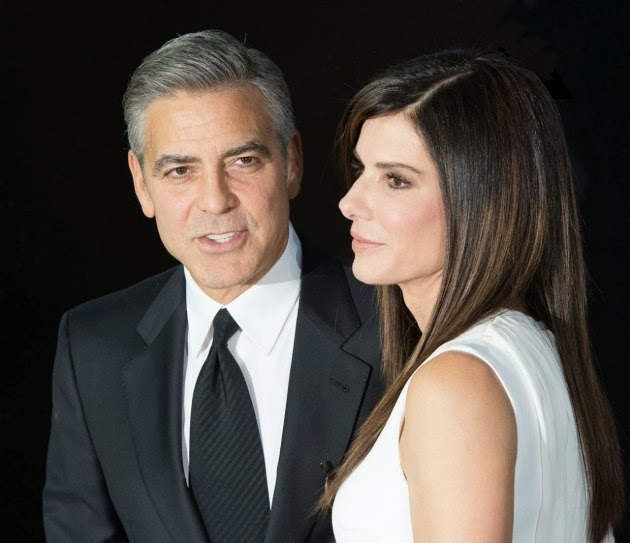 George Clooney has joked Sandra Bullock drinks too much.

The mischievous Hollywood heartthrob has cheekily claimed his friend and 'Gravity' co-star is constantly falling over because she downs so much booze, but is always a laugh on set and is "incredibly charming".

Speaking in a fan Q&A with Reddit, the 52-year-old actor quipped: "It's tricky cause Sandy drinks so much that sometimes it's just hard to keep her upright. No, you know, Sandy and I have known each other for over 20 years and we both were struggling actors when we first met. She was dating a friend of mine at the time who's still a good friend of ours. Every time we're together it's funny.

"She's somebody I adore, really, she's just fun to be in a room with. I'm sure people will assume people aren't quite who they appear to be on-screen - they're shorter or taller or meaner or dumber - but Sandy is exactly what she appears on screen, an incredibly charming woman who's really just fun to hang out with. Very smart and centred, even though she does drink a lot."

He laughed: "We were shooting 'Ocean's 12' in my hometown in Lake Como, and he had a flier sent around saying George only wants to be called by his character's name Danny Ocean, don't look him in the eyes. It got into the local paper. As you know, jokes don't translate at all, and they called me il divo, and said that I was treating the crew like s**t.

"When it got into the paper I came downstairs and Brad had the paper in his hand, and I said, 'You're mine from here on out.' Brad just said, 'Please don't harm my children.' Yeah, he's done some pretty rotten things."(FF. UK. CO)