Inga Enna solluthu will Be released in 260 Screen 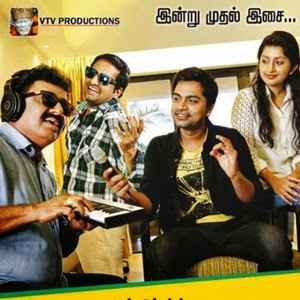 After tremendous openning in 2014 with Thala-thalapathy films, Vijay's Jilla and Ajith's Veeram for Pongal followed by Goli Soda during the Republic Day weekend, theaters in Tmail Nadu are gearing up with five releases on the last weekend of January.

Story, production and acted by VTV Ganesh, Inga Enna solluthu is one of the noted Tamil films that competes with Vijay Sethupathi's Rummy during the opening weekend on February. Meera Jasmine, Santhanam played other lead roles in IES while STR and Andrea Jeremiah done cameos in the film.

Music by Dharan and D. Imman are expected to be one of the highlights of IES and Rummy respectively. Sri Thenandal Films presenting IES will be released on Jan 30 in nearly 260 screens while Vijay Sethupathi's Rummy will hit screens on 31 Jan in more than 200 screens.