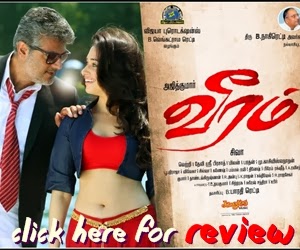 The day has finally arrived. It is a complete festival time for all Ajith Kumar and Vijay fans', as their movies Veeram and Jilla have simultaneously releasing today (January 10).

The films had hit the screens last evening itself at foreign countries. Ajith Kumar is returning after the massive success of his last movie Arrambam, one of the biggest hits of 2013.

This factor has added a high expectation on his latest film Veeram. After doing urban-centric roles, the Thala is returning with a rural-based subject. So, this factor has attracted cine goers.

It is an action movie revolving around Ajith Kumar and his four elder brothers. Tamanna Bhatia, for the first time, is playing the female lead role. The film is directed by Siruthai Siva and produced by Vijaya Productions. Click Here To See Movie Stills The trailers and songs of Veeram had become hits. This factor has added fuel to the rising expectation on the film by the audience.

Is the film up to the mark? Is the hype around the film justified? What the film has to offer? The answer is here. Veeram has opened up to positive reviews in international circuits. It has been appreciated by Ajith Kumar and regular audience. Now, we are bringing you some of the reviews posted by fans on Twitter.

Verdict By Fans: Veeram - 3.25/5. Families should enjoy this, and for sure all #Thala fans should too. Enjoy the movie once, twice and even three times! #Veeram - 3.25/5. Yes, I believe it has beaten #Jilla thanks to it's favourable story and mixed comedy, action and sentiment.